In an excellent development for the home care industry, the U.S. Department of Labor (DOL) issued an Opinion Letter permitting agencies to utilize consistent “shift rates” that are inclusive of a pre-payment of overtime when agencies compensate caregivers providing live-in services and extended shift services of 24 hours or more. Littler Mendelson requested this opinion on behalf of the industry to clarify the rules around this practice with the hope of eliminating much of the litigation that has resulted due to the misunderstanding caregivers often have with the structure of their pay for live-in and extended shift work under this type of program.

A “live-in” caregiver, under federal law, is a caregiver who works “extended periods” in the client’s home. This could be someone whose sole residence is the client’s home, or it could be someone who spends as little as five consecutive days or nights per week in the home (such as working Monday at 7 AM to Friday at 7 PM). An “extended shift” caregiver is at the client’s home for over 24 hours, but something less than the time required to be considered a live-in. This distinction is most important for determining how many hours can be potentially excluded from pay. An extended shift caregiver may have up to eight hours of sleep and potentially three hours of meals excluded from pay for each 24 hours of work (depending on state law). It is possible for live-in caregivers to have even more downtime excluded when they are free from work without losing the ability to deduct additional time for bona fide sleeping time.

Agencies frequently discuss compensation for such shifts on a “per-shift” basis because this is generally how live-in and extended shift caregivers evaluate the financial value of the assignment (rather than a specific hourly rate). Some agencies have found they need to quote pay rates in this way to encourage caregivers to take specific assignments. The Opinion Letter is helpful in establishing that agencies are permitted to blend overtime into each shift even before it is earned within the workweek to communicate the average shift rate based on the total anticipated hours worked.  However, there are specific rules that must be followed to fully take advantage of this Opinion Letter. 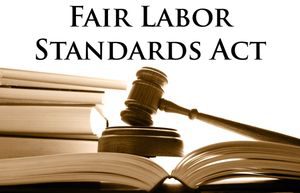 Major complications can arise when a caregiver is without a clear understanding of the pay structure when working live-in and extended shifts. Often caregivers think that they will be paid a consistent amount per shift regardless of the number of hours they work.  This is not a shift rate but an improper day rate.  This pay method can violate the federal Fair Labor Standards Act (FLSA). Under the FLSA, non-exempt employees (such as caregivers employed by home care agencies) must be paid at least the minimum wage for all hours worked and an overtime rate of at least 1.5 times their regular rate for hours worked over 40 in a workweek (we are putting aside more restrictive state laws, such as those in California and Colorado, which have additional rules).  Non-exempt caregivers paid on day rates that do not adjust based on actual hours worked may have a claim for overtime even if the day rate is high enough to cover minimum wage and overtime.  This is because non-exempt employees must record actual time worked and be paid the appropriate amount of overtime earned as a result of that work.

To avoid confusion between an adjustable shift rate versus an inflexible day rate, an agency MUST properly explain the shift rate pay method in a written agreement signed by the caregiver. The arrangement should also include the hourly rate of pay, expected hours of work each shift, and anticipated number of shifts so that it is clear how the caregiver is being paid.  The agreement should expressly state that the agency is paying advanced overtime as an administrative convenience rather than as a result of a legal entitlement.  The caregiver still needs to track her actual hours of work each week so that adjustments can be made for hours worked beyond the anticipated schedule at the appropriate rate. It is imperative that an agency not just track the start and end of each workday but also track any other periods when a caregiver isn’t supposed to be on-the-clock. Similarly, the agency needs a method to track any interruptions when the employee is not supposed to be working during meal or sleep periods but is called to work.

The DOL’s Opinion Letter paves the way for agencies to simplify live-in compensation practices with the protection of the good faith defenses available under federal law to the extent the program is set up correctly.  Agencies should no longer be wary of providing clients with live-in and extended shift services. A properly crafted program that complies with state and federal law and incorporates the appropriate time tracking measures will not significantly change the agencies risk profile.  So please get out there and help those seniors!