As a result of moving to Illinois after acquiring ownership of BRC Access Care in 2018 and initially, making it a point to get to know all my clients, I have come to know a most remarkable lady.

She celebrated her 101st birthday in October, 2020. She has given me many lessons in leadership.

Her name is Loretta Meyers.

She is a Chicagoland native, a retired businesswoman, a wife, now a widow, a mother, grandmother, and great grandmother, and is a successful teacher. And Loretta is a leader in her community. She resides in a warm and cozy retirement center called “The Mather” in Wilmette, IL, a Chicagoland North Shore suburb.

Our agency, BRC Access Care, is privileged to provide loving caregivers for Mrs. Meyers daily. (Thanks to Bel and Helen).

Most folks would say she is disabled, since Loretta gets around with the help of caregivers and the use of a wheelchair and a walker. These things do not discourage Loretta. She leads from the heart and the will. I knew her to be a strong and positive person, having had opportunity to visit with her several times during 2018-2019. As I began to know her better, my respect and admiration for her grew more and more.

For example, in October 2019, I was privileged to attend her 100th birthday celebration at a nearby country club. There were many friends, adult children and their spouses, and grown up grandchildren. She is very blessed and has had a warm and loving life. She is always very personable, attentive and humorous. She simply spreads her love everywhere. That to me is leadership at its essence.

As a token of the love and admiration we at BRC have for her, I was fortunate to arrange for my BRC ‘entourage’ see her on a Sunday afternoon before Christmas. My entourage included my friend Kym and a couple of kind teenagers who have dubbed their visitation ministry “Cardinal Cares”, (using the metaphor of the cardinal as a symbol of God’s attendance and care for us just when we need it), a concept fostered by a caring parent of one of the teens, my friend Kym Malkin. 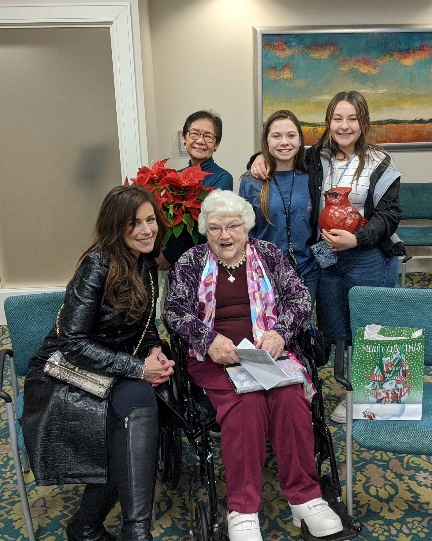 Pictured with Loretta is the sponsor of Cardinal Cares, Kym Malkin, and her daughter Mimi and friend Daisy. Also pictured, behind Mrs. Meyers, is our loving caregiver, Helen, holding the poinsettia we brought to Loretta.

While we were visiting Loretta, there was a caroling program going on in the center that she was interested in attending. While visiting with her after the program, we encountered a few of her friends who are also residing at the center.

One of her friends at the center was our BRC client Mr. Richard Baer, another of our wonderful clients who resides at the center. (Loretta referred him and his wife to us.) He is a bright and intelligent 90+ years young. Mr. Baer is an avid reader and is an enthusiastic and kind man. He loved the attention of the teens who shared their ministry of presence. 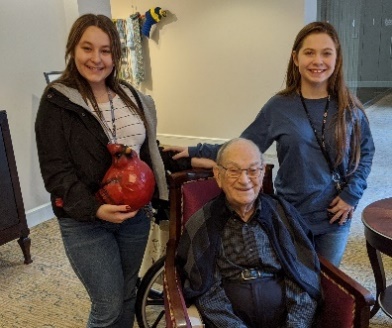 Mr. Baer with Mimi and Daisy and “the cardinal”

While we were with him, Mr. Baer told us an interesting anecdote about Loretta Meyers.

According to Mr. Baer, beginning in 2018, and over the past several months, she has begun leading a program at the Center called “The Great Courses”. It is an online gathering of course materials from several excellent sources, such as universities, National Geographic, how to experts on everything from “understanding quantum physics” to “how to play the guitar”. These courses are offered as a series of video instruction, streamed online. These lectures, and instruction, have been developed, regarding history, literature, science and world affairs.

Intrigued by the possibilities for helping others to keep their thinking and learning sharp and ready, she knew the value of lifelong learning. 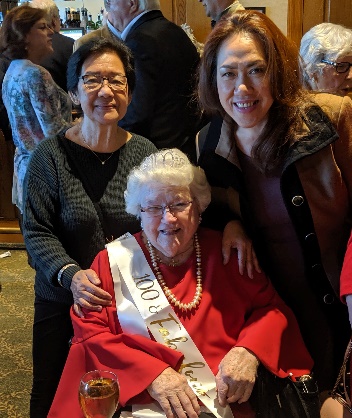 Loretta at her 100th birthday party in Oct. 2019with her caregivers, Bel and Helen

Loretta began offering this “Great Courses” material at the Center where they reside. She curated the courses, promoted the sessions at the Center, and acted as the master of ceremonies for each event.
Initially, they had 5 of Loretta’s friends in attendance at their first gathering.

As the weeks and months went by, Loretta faithfully conducted the courses once a week. Due to her persistence, the numbers of participants for this lifelong learning course increased, until, due to the growth of the course, the Mather moved the gathering to a larger space, since it had grown to an average of 75 in weekly attendance.

Loretta Meyers is /was the driving force!

At age 101, she is continuing to initiate a lifelong learning experience for her cohort there at the Center, encouraging others to join her as lifelong learners. 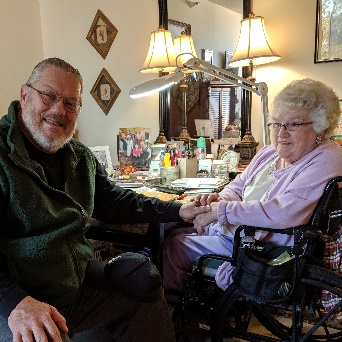 What a great lady and outstanding leader she is! She maintains a positive, learner’s posture in life and encourages all she comes across. I admire Loretta Meyers. She is an energetic lifelong learner and enthusiastic teacher. Throughout the pandemic she has sent a handwritten note to us at the office every two weeks, thanking us for the wonderful caregivers and services we provide.

On March 11, 2021, the CDC announced protocols for opening all the US Skilled Nursing Facilities to visitors. Loretta is happy because she can once again welcome all her children, grandchildren, and great grandchildren back to the center for visits.

I cannot wait to see her again. She is such an inspiration!

And—-The Great Courses sessions at Mather will surely return, certainly if Loretta Meyers has anything to do with it.

Sam Smith is a member of the NAHC Advisory Council for Private Duty, and is CEO of BRC Access Care, in Chicago.