While it is impossible to determine with certainty whether President Biden’s proposal to increase funding for Medicaid home and community-based services (HCBS) by $400 billion will ultimately be included in one of a number of expected large legislative packages, NAHC is encouraged by recent signaling that the HCBS boost continues to be a priority for the Administration.

The latest indication of support for the increased HCBS funding was its inclusion in the President’s FY2022 budget, released on Friday, May 28th. The budget asks Congress to appropriate the $400 billion investment in HCBS over 10 years, the same proposal Biden has been pushing for as part of his infrastructure-focused American Jobs Plan.

The HCBS proposals currently lack detail, but much of the public positioning on the plan emphasizes supporting the direct care workforce by increasing wages, benefits, and career ladder opportunities. The President’s budget states “The President’s plan makes substantial investments in the infrastructure of America’s care economy, starting by creating new and better jobs for caregiving workers. It would provide home and community-based care for individuals who otherwise would need to wait as many as five years to get the services they badly need.”

While the President’s budget is not a binding document, and Congress is under no obligation to craft legislation that tracks the budget’s requests, it does typically have more influence when there is unified control of Congress and the Presidency, as there is now with the Democratic party. Many observers expect that the President’s budget will serve as the blueprint for congressional leaders’ efforts to craft their own budget resolution, which would be the first step in the process towards passing a massive infrastructure package along party lines using the complex process called “budget reconciliation”.

However, President Biden has not yet definitely signaled that he supports the “reconciliation” route at this time. He continues to engage with a group of Republican lawmakers in an effort to determine if there is a bipartisan deal to be had on an infrastructure bill.

Notably, the latest Republican counterproposal to Biden’s plan, released on May 27th, does not include any HCBS provisions. In an earlier memo from the Administration to the group of GOP negotiators, Biden again called out HCBS as a critical component of an infrastructure vehicle. 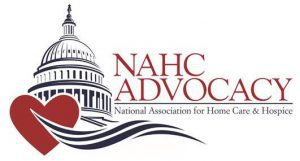 While timelines remain fluid, it is expected that if significant progress is not made within the next week or two on a bipartisan compromise, Democratic lawmakers will begin the reconciliation process in earnest, working under the assumption that a large infrastructure package will need to pass with Democratic votes only.

NAHC continues to advocate with policymakers to support HCBS proposals that will benefit our members, their workforce, and the patients and families they serve in every community across the country. We will update our membership as the negotiations unfold and a clearer path on major legislation emerges.